The Shoes of a Fisherman 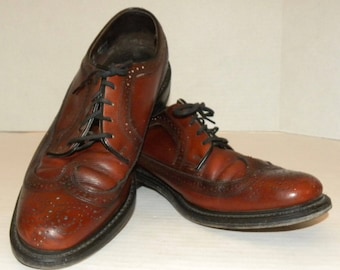 He would sit there every Sunday – frozen.  Two socks on, one shoe on and the right shoe in his right hand.  Just staring – frozen and looking out in space for five to ten minutes.  Eventually he would snap out of it and put his right shoe on and finish getting dressed for Sunday school and church service.

This was my father’s routine every Sunday.  He would take out his J.C. Penney suit and his Florsheim wing-tip shoes.  He would then get partially dressed and retrieve this rickety wooden shoe shine box packed with its assortment of Kiwi polishes and rags.  The task of polishing his shoes was automatic; years in the Army during World War II had taught him the importance of well-cared for footwear.  His application of the polish was meted and purposeful as were his brush stroke and the finishing snaps of the rag as he applied the spit shine on his beloved wing tips.

He then re-packed all the polishes, brushes and rags into the old wooden kit and placed it back in the closet.  A seat was taken on the sofa in the living room where this all took place and the left shoe was put on then the right shoe was picked up and the trance began.

I was nine when I noticed the routine.  I would watch him around the corner of the door; not daring to interrupt.  Even at the age of nine, I had some sense that what he was doing was sacred, needed and important.  I didn’t know the “why” but I DID know it was necessary.

He did the same thing when he went fishing.  I never could comprehend why he would go fishing after a long day of work and make cast after cast while staring out into the pond.  You could see it, though, with every cast.  The fishing had become automatic and his mind was performing a very important task that could not be interrupted by the loud splashes of a boy throwing rock after rock into the water.

Fifty years later, on a recent Sunday, I believe I found the answer to the question – “why.”  I, too, was putting on my shoes to go for a walk and found myself frozen in time with my right shoe in my hand. I have written about my dad’s routine before but something was different and revealing on this particular Sunday.  When I finally snapped out of it after five minutes or so I had a sense of what my dad, at around age 59 was experiencing and what I, also at age 59 was experiencing.  It was the examination and filing of those life events into some sort of order within your brain.  It felt like my mind was putting everything back in the right file folders and placing them in the correct position in my “file cabinet” so I could move forward.

My dad’s files were World War II, the tobacco fields, the Great Depression, working as a logger and raising two sons and they all had to be unpacked, examined and re-filed so he could move forward that week.  My “files” seem to pale in comparison to my dad’s but they were mine and needed to be sorted. I have more or less placed this sorting on hold for the last three years. That needs to change and my dad once again showed me the way that recent Sunday morning.

At the age of nine,  I never understood why my dad went into a trance while putting on his shoes or fishing.    It seemed insanely boring.  Now I understand.  Now I need to move forward sharing his legacy of kindness and compassion; one right shoe, one long walk and one long bike ride at a time.

This entry was posted in Uncategorized. Bookmark the permalink.

5 Responses to The Shoes of a Fisherman